In Music Collection, you add your own genres that you have in your catalogue. There's no pre-stablished genre database, you can create all the genres you want and make you own genre tree.

When you add a new genre, you'll be asked if it has some parent genres. Everybody has his own idea of what are the relations between different genres, and in MC you can set yours. For instance, some would like to have the genre "hard rock" displayed as a main genre, and others would like to display it as a sub-genre fo the main genre "rock".

In Music Collection THERE'S NO LIMIT on creating genres and descendant genres. You can have as much genres as you like, and you can have as many "levels" as you want in your genre tree. There's no limit on choosing how many genres are parent of a specific genre.

The great advantage of that structure is that every genre you have in your catalogue automaticly inherits all his predecessor genres, and that property is shown, for example, when you make a search 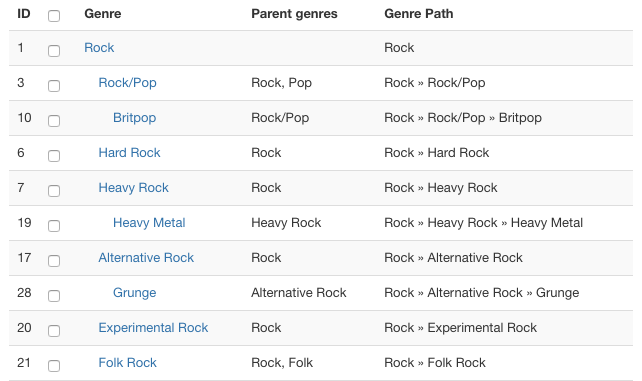 Let's make an example: I have created two "root" genres (root meaning "first level", no parent genres): "Rock" and "Pop" (ok, maybe you'll consider that in fact Rock is a children genre of Pop, but wi'll make the example this way ;)

If we search "Rock" albums in the front-end, albums tagged as Bripop albums will be shown. The same with Pop or Rock/Pop

Is very easy to define your own genre tree, but at the same time it allows you to have you collection perfectly structured

Looking for something else? New features, code tweaks, layout changes...?